We listen to feedback provided by those who use Sentinel and take this internally to the accountable departments at Network Rail for decisions to be made. Please see recent issues and resolutions below:

When Sentinel was upgraded in 2013 to a smart solution in newly formatted cards, the photograph guidelines were set and these have not changed. Guidance is shown on the image upload page in Sentinel (illustration below) and you can also look here if unsure: https://www.gov.uk/photos-for-passports/photo-requirements 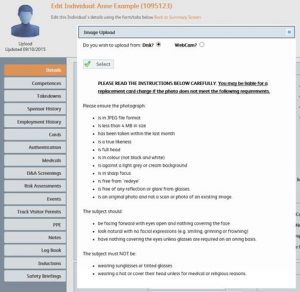 During a recent review of photographs we have noticed several with hats, sunglasses and non-plain backgrounds, making it incredibly difficult to accurately identify someone in poor track-side conditions. The Sentinel Helpdesk are now able to review all new or replacement card orders and will reject any that do not meet the criteria, which could result in a delay. Please note if you are ordering a replacement card it is advisable to upload a recent photo as this will extend the life of the card.